mullen is getting his butt kicked in the Sunshine State in the area of recruiting. He is trying to cover up his "smugness" with the urban liar meyer "method" or urban's "process". In the State of Florida the "U" under positive leadership is coming on fast (fact) and causing a lot of problems for the mullen "process".

As yankeedawg1 has pointed out, mullen has painted himself into a corner that is going to effect the gator program more than some suspected at the beginning of the mullen hire. Dawgs in Florida are enjoying every presser or media chat that mullen has . . . . read below if you have not already.


“If I was going to do an attendance deal, obviously I would have done 41,140 or whatever the Florida State score was, one of those deals,” Mullen said. “I think people look at it and try to make a bigger deal out of what you say, or dig deep into what I’m saying.”

Can't seem to keep his foot out of his mouth . . . .
The following user(s) said Thank You: yankeedawg1

Less More
11 months 4 weeks ago #79945 by SimpleDawg
Replied by SimpleDawg on topic gators and mullen lose again
Mullen did a really nice job at Miss State....got some very talented players to sign with the Bulldogs, just not enough to make a consistent contender.

Now that he's back at Florida, he's in a much different environment.....swimming with bigger predators, going after the same food sources, but without the cover and protection of Starkville. There he could go 8-5 and be a hero, 7-5 would be okay, even an occasional 6-6, but then another 8-5 and he was Golden Mullen again.... He even caught lightening in a bottle there for a couple of years, but really all he had to do was beat Ole Miss at least every other year.

The pressure at Florida is pretty intense, every year. The remembrance of the Spurrier dynasty is still the bright sunrise they're all chasing. But the landscape has changed. Kirby Smart coming to Georgia instantly made the SEC East a more difficult hill to climb. UGA was closer to being a contender than UF at that time, and with the proper helmsman, the Dawgs were off and running. Meanwhile, back at the swamp, Dan the Man was realizing what a mess he had inherited....and then the pressure began to mount. And just like a tempest in a teapot, he began to squeal, letting off pressure..... Spurrier bragged unabashedly because he knew he had everyone covered. Moondog Mullen runs his mouth so recklessly because he doesn't know any other way make the hounds chase the red herring. He's up to his neck in a real swampy mess at Florida, and UGA, UM, et al are making his life miserable.

Just wait until he has a couple of off years, and people will be comparing him to Ron Zook, instead of Spurrier or Meyer. The Gator fans will have their jorts in a bunch, and there will be no way for Mullen to quip his way out.
The following user(s) said Thank You: Buc, yankeedawg1, growl

More to be said. Diaz and others will or have gotten mullens attention, UGA is not the only team that is currently bearing down on the gators. There are still very good athletes in South Georgia that like the FSU area.

You are spot on with Spurrier. Fans in Florida haven't given up on the coach that coached them out of the wilderness. gator fans thoughts were that there was not an end in sight. Had some wins with meyer, cost the program in many ways and are yet to recover. So right you are . . . . mullen is in a "different game" in Gainesville, what he accomplished in Mississippi does not carry any weight in the Sunshine State.

Less More
11 months 2 weeks ago - 11 months 2 weeks ago #79966 by Buc
Replied by Buc on topic gators and mullen lose again
A little more or maybe a lot more salt in mullen's wound(s). gators lose another player to Georgia that was on the top of their list for their offensive line. Huge get for the good guys. mullen also lost another heavily recruited player to Miami in the past few days. Georgia and Miami are bringing the heat. 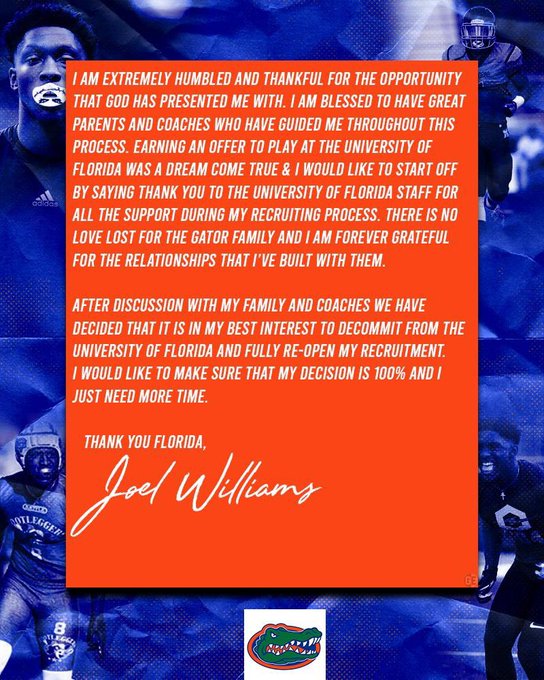